An interesting case of autografting

This autumn I had the privilege of documenting several operations for head and neck cancer. Some of the most fascinating operations involved the use of an autograft to replace the resected cancerous structures.

One of these operations was performed on a patient with cancer of the gingiva (gums). The tumor had infiltrated the mandibular bone and the surgeons had decided to remove the tumor and a part of the mandible.

In order to make a functional jaw, they were going to cut out a segment of the patient’s fibula (calf bone) and reconstruct the mandible. 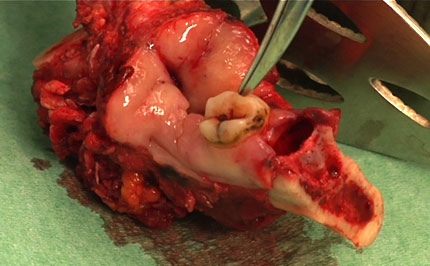 The resected segment of the mandible with a tooth. The missing teeth are replaced with a dental prosthesis.

The operation would involve both head and neck- , hand- and oral and maxillofacial surgeons.

Mandibulectomy and reconstruction with fibular graft
The operation proceeded like this:

An x-ray of a jaw with fibular graft in place. The titanium plates are clearly visible on the right.

If there was no complications with the blood circulation of the graft, the patient would have a fully functional jaw and would not have any problems with the divided calf bone.

Surgical video
Watch my video of the operation here. Commentary in Norwegian, but if you’ve read this post you’ll hopefully be able to follow the procedure.

§ 7 Responses to An interesting case of autografting

You are currently reading An interesting case of autografting at The Sterile Eye.