I have no surgical training. I started nursing school once, but quit after finishing my anatomy and physiology exams. But as I spend large portions of my work week in ORs, I’m sometimes called upon to assist the nurses when things get a bit too hectic.

A few weeks back they did. 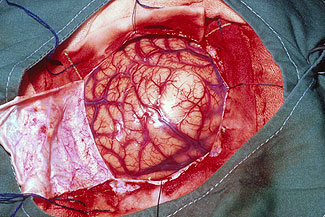 I was scheduled to make a video of a craniotomy. The patient had a neoplasm in the brain, believed to be causing his epilepsy. Because the neoplasm was located deep in the patient’s frontal lobe, he had to be woken several times during the procedure, so the surgeons could probe the areas around the lesion and avoid the eloquent regions. He was only administered local anesthetics and sedative drugs.

As always I arrived at the OR after the patient had been brought down from the surgical ward. Looking in through the window I saw the anesthesiologist was still working, and I went to disinfect my video equipment. I always prefer to stay out of the OR until the patient is sleeping. He should not have to think about me a few minutes before they’re going under the knife. To be honest, I probably find it easier not having to relate to the patient as a person too.

Although not in general anesthesia, the patient would be sleeping for most of the operation. Finishing the disinfection I entered the OR to connect a hard disk recorder to the surgical microscope. I noticed the neurosurgeonwas fixing the patient’s head in a three-point headrest. When I was done the surgeon had left and the nurses had resumed with covering the patient in sterile drapes. Everything seemed to proceed as normal and I left the room to get a cup of coffee thinking the operation would start in 30 minutes or so.

With the OR door ten steps behind me I suddenly heard shouting and running feet. What was going on? I turned an entered the OR again to find the two nurses just managing to keep the patient from falling off the table. Blood everywhere.

The sterile nurse ordered me to get her out of her bloody gown. While the other nurse ran to get the surgeon, I had to do her job. That meant getting out new sterile gloves and gown for the nurse, handling bloody drapes, pouring warm saline solution and finding the right kind of suture until the non-sterile nurse arrived with the surgeon.

What had happened? The patient had a violent epileptic seizure. So violent that his head was pulled loose from the pins fixing it to the headrest, the pins tearing into the skin around the points of fixation. The nurses later told me it was just luck that kept him on the operating table. They were furious with the surgeon who didn’t warn them that this could happen and make sure there was enough hands in the room to keep the patient down.

After stopping the bleeding in the patient’s scalp and cleaning the floor, the patient suddenly woke. Heavily sedated, he had slept through it all.

In stead of the three-point headrest the patient’s head was now placed on a vacuum fixation pillow. The operation proceeded without any more incidents. Two times during the operation the patient was woken and asked to loudly state the days of the week.

A bit shaken by the emergency I tried to concentrate on my job. But suddenly being more involved in the events, the person who was being operated on became more real to me. I found it hard to stay focused when the days of the week was cited from beneath the drapes. Worrying that he might get them wrong. Wondering what he must be thinking, having been unconscious during an emergency and conscious during brain surgery.

I guess this incident was a reminder to me of the dramatic events I’m documenting in my work. Although most operations proceed calmly and without any physical drama, they’re none the less milestones for the patients, determining the course of their lives.

The patient got the days right both times, by the way. Hopefully he was cured of his epilepsy.

Here is a video I’ve made of a craniotomy to remove a tumor. Not from the case described here. Commentary in Norwegian.

Check out this interesting patient’s account of an awake craniotomy.

Here’s a good feature article on the subject from St. Petersburg Times.

The photos in this post are not from the described case. Photo credits: photo 1, photo 2.

You are currently reading Awake awakening at The Sterile Eye.