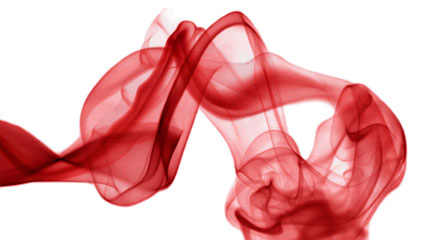 Normal tissue hardly smell at all. Your skin smell because of bacteria in your sweat. Your mouth stinks because of bacteria, and another source of foul odour is caused by gas producing bacteria. Opening the abdominal cavity does not emit any smells, unless there’s some infected parts, necrotic tissue, pierced bowels or gas present.

Cutting the body is not in itself a source of foul scents, but the way it’s cut can cause smell.

Diathermy
Since Cushing pushed the first electrosurgery knife (called a bovie) into somebody’s flesh in 1926, surgeons have been using electricity to cut through tissue and cauterize blood vessels.

When you apply electric energy to tissue, heat is created inside the cells making the cellular fluid boil and vaporize. This increases the pressure inside the cell, causing it to rupture. The remains are burned by the heat. The result is that surgeons can cut through tissue and seal small blood vessels, without going through the tedious process of clamping off, cutting and tying off the vessel.

The use of electrosurgery, or diathermy as it is also called, has become so commonplace some now humorously refer to scalpels as the “smokeless bovie”. Because diathermy creates smoke. This smoke contains water vapor and different chemicals from the cells. And this smoke is what took me a lot of time getting used to. It’s hard to describe how the smell of burned human flesh is like. In many ways it resembles the cooking of animal meat, but it’s also very unlike anything else. You sort of unconsciously know that this smell is wrong. 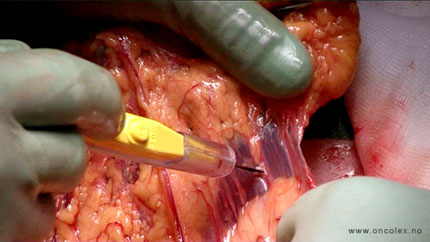 Cutting through blood vessels of the greater omentum.

The smoke can actually be a health hazard for surgical team members who inhale it everyday. This is kept to a minimum by keeping the ORs very well ventilated and sucking up the smoke in different ways. The diathermy knife on the above picture has built-in suction. But some smoke always finds it way to your nose. In the beginning even a whiff of it would make me nauseous. Not enough to make me loose focus, but keeping me slightly uncomfortable for the rest of the operation. I often stand pretty close to the surgical field with my camera so I get a steady supply of smoke. A couple of times I’ve had to take a few steps back and gather myself after getting it right on.

Sawing bone
Another source of OR smell is the bone saw and drill. Although water is used to cool it down, enough heat is produced when the saw oscillates through bone to produce smoke. And with smoke comes smell. Bone saws are used for everything from amputations to craniotomies. This smell is stranger and more unpleasant than diathermy. Few of us cut bone on our spare time, so it’s hard to compare it to anything. It’s acrid and warm, not as “sweet” as that from diathermy.

Scentless apprentice
Wonderful as the human body is, I soon got used to the smells. Of course I still notice when there’s smoke in the air, but the smell has taken on a familiar feel. It’s become part of the experience. Just like the chemical smell of the surgical mask. Must be the same way garbage collectors feel. Part of the job. Familiar and maybe even comforting.

My girlfriend doesn’t get used to it, though. Coming home from work, she can tell which days I’ve been filming an operation.

I’ve been meaning to write this post for a long time, and was inspired to finally do so by this post from Sid Schwab’s excellent Surgeonsblog.

You are currently reading Inner scents at The Sterile Eye.