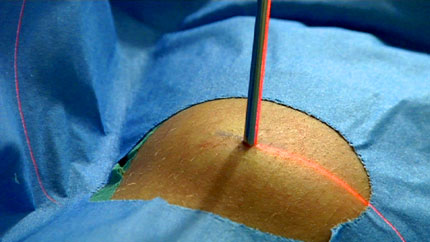 diagnosis
1. the process of determining by examination the nature and circumstances of a diseased condition.
2. the decision reached from such an examination.

Filming diagnostic procedures is always a somewhat strange experience. It’s very different from filming operations where the patient is asleep and at a stage where she’s probably accepted her condition. The operation is a possibility of healing. It can change things for the better. A diagnostic procedure can change things for the worse. Right then and there, without the patient knowing.

This week I documented a CT-guided bone biopsy. The patient was a guy in his twenties with a lesion in his left tibia. The biopsy was scheduled to determine if the lesion was benign or malignant. This was the test that would determine if he had cancer.

Waiting in the control room for the procedure to start, my thoughts drifted back a few months to a similar procedure.

This patient had a lesion in his right lung. The biopsy would determine the same for him. Was it cancer? This was going to be a fine needle aspiration cytology (FNAC) biopsy. A thin needle is inserted into the lesion. Applying suction with a syringe, fluid containing cells is drawn from the lesion. With this technique the cell material can be stained and examined in a microscope right away. It normally takes a couple of weeks before the pathologists reach a definite conclusion on the diagnosis, but in many cases they know after having a quick look.

Before the biopsy the patient was asking when the results would be ready. He was nervous. He had two kids. This test could determine how the rest of his life would be like. I was busy filming while the radiologist performed the biopsy. On this occasion the pathologist arrived at the CT lab with his staining equipment. I wasn’t going to film that part, but I stayed for some reason I can’t remember. One of the slides was placed under the microscope, and after just a few seconds the pathologist said: “This is small cell lung cancer. No doubt about it.”

The patient was not hearing this, of course. He was still on the scanner table chatting with the nurses. He would not know for another two weeks. But right then and there everybody in the control room knew he was suffering from the type of lung cancer with the worst prognosis. In fact, for most patients with small cell lung cancer, current treatments do not cure the disease. It felt I knew something I was not supposed to know. Like a dark personal secret. As he was wheeled out of the lab smiling, I felt even more uneasy.

Drifting back to the present, the young patient was now sedated and ready for biopsy. Using CT images to determine the right position, the biopsy needle was inserted gradually into his shinbone, and a small piece of bone was removed (top picture). Some blood from the biopsy was sent for immediate cytopathologic inspection. They would probably have a clue about his lesion right then and there. Without him knowing.

I’ve filmed a lot of diagnostic procedures, and of course it’s not right to tell the patient anything until the diagnosis is conclusive, but still I never get used to this aspect of it. I don’t know what the young man’s diagnosis was. As long as you don’t know there’s hope, right?

aspiration
1. a hope or ambition.
2. the act of drawing fluid by suction from a vessel or cavity.

Watch the video of the lung biopsy here (Norwegian commentaries).

§ 3 Responses to Diagnosis and aspiration

You are currently reading Diagnosis and aspiration at The Sterile Eye.