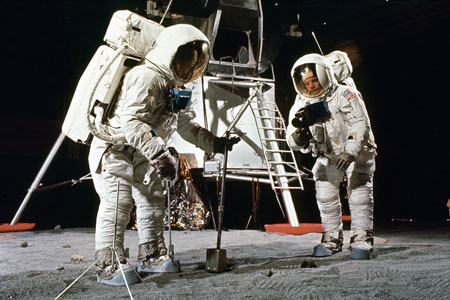 Buzz Aldrin and Neil Armstrong in training for the Apollo 11 mission. Aldrin scoops up a soil sample, while Armstrong aims his camera. Photo by NASA. Click for larger version.

I’ve been an avid follower of the 40th anniversary of the Apollo 11 lunar landing this week. Although it’s a bit on the side of what I usually write about, I want to celebrate this great leap by taking a look at the cameras Neil Armstrong, Buzz Aldrin and Michael Collins used to take those iconic pictures from the Moon and of our Earth.

The still photographs from the 1969 lunar landing have become part of the collective human memory. Few photos carry the same iconic status as the first pictures of human beings on another celestial object. But few have given any thought to how the astronauts managed to take those beautiful photos with their bulky helmets and gloves.

Ever since astronaut Walter Schirra brought along his private Hasselblad 500C on the Mercury 8 mission in 1962, NASA had been working with Hasselblad to make cameras suitable for space missions. It was in fact not until NASA saw the quality of Schirra’s photos, they realized the importance of documenting their missions with photographs.

On the Apollo 8 mission, Hasselblad 500 EL electric cameras were used for the first time. This was used on Apollo 9 and 10 too, before two were brought along for the Apollo 11 mission. The 500 EL had an electric motor that wound the film and tensioned the shutter. The camera was supplied with two lenses, a Zeiss Planar ƒ/2.8 / 80 mm normal lens and a Zeiss Sonnar ƒ/5.6 / 250 mm telephoto lens. On Apollo 11 these cameras were used to take pictures from inside the Command/Service Module and the Lunar Module. For the surface shots, however, a special version of the 500 EL was designed – the 500 EL Data Camera. 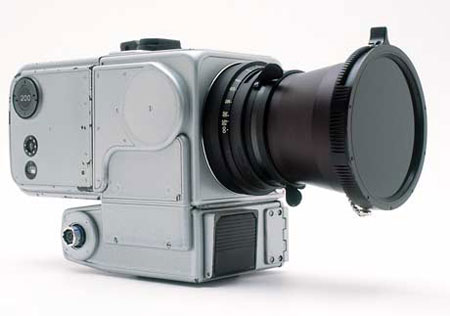 This camera had to work in the extreme conditions of space, with vacuum and temperatures varying from 120° C in the sun to minus 65° C in shadow. The camera was painted silver to make it more resistant to the variations in temperature. Conventional lubricants had to be eliminated as they would boil off in the vacuum of space. It was fitted with a Zeiss Biogon ƒ/5.6 / 60 mm wide-angle lens and a polarizing filter, which reduces reflections.

It also had a glass plate with engraved grid-aligned crosses (Reseau plate) fitted close to the film plane. These crosses was recorded on every photo as a means to measure angular distances between objects in the frame. The same method was used in aerial photography at the time.

An accidental exposure showing the Reseau plate crosses against a blurry space suit. Photo by NASA. Click for larger version.

When on the lunar surface, the camera was mounted on a bracket on the chest of the astronaut’s space suit. This both provided some support to the camera, and made it possible to manipulate the rings and levers with both hands. A trigger was fitted under the camera to make it easier to fire (see photo of Aldrin below).

Exposure
The cameras did not have any light metering or automatic exposure. Based on experimentation on earlier Apollo missions, exposure settings for the different kinds of expected lighting conditions were worked out in advance. The guidelines were printed for the astronauts on the top of the Hasselblad film magazines (shown below). The shutter speed was set to 1/250, and the f-stop recommendations were ƒ/5.6 for objects in shadow and ƒ/11 for objects in the sun. For some of the more important photographs, the astronauts utilized exposure bracketing, varying the exposures one stop up and/or down from the recommended setting, to ensure a good result. 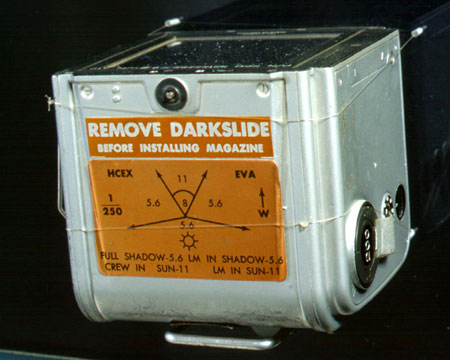 Focus
The focusing system was similar to a lot of consumer compact cameras of the era. The f-stop was kept relatively high (the lowest being ƒ/5.6). Combined with the wide-angle lens (60 mm) this results in a relatively large depth of field (increasing with increasing f-stops). This meant the astronauts only had to get the focusing distance approximately right to get a sharp image. Instead of an infinitely variable focus ring, it was divided into three preset positions: near, medium and far. Although not extremely accurate, it did the job. I have an old Kodak compact camera with this system myself, and it works surprisingly well.

Framing
The 500 EL Data Cameras did not have a viewfinder, as the astronaut’s helmets restricted movement too much for it to be useful. Instead the lens was fitted with a simple sight that the astronauts used to point the camera in the right direction. This is of course not a very accurate method, so the astronauts were trained in pointing the camera all through the preparations for the mission. They would bring along cameras for simulations, take photographs and review them afterwards. The crew was even encouraged to bring along Hasselblad cameras on private trips to familiarize themselves with the equipment and perfect aiming the camera.

In a passage sited on the Apollo Lunar Surface Journal, Apollo 12 astronauts Charles Conrad and Al Bean comments on the camera training:

Conrad – “(…) One of the things was setting the camera deal; we had the three (focus) distances. And what we did was actually take pictures to calibrate ourselves. They developed that film in training to make sure we stood the right distance.”

Bean – “We had to point that (chest-mounted) camera without a viewfinder. (But) we didn’t miss a (single) one on the Moon, I don’t think.”

Conrad – “Yeah, and it was due to the training. We really worked hard at learning to estimate by eye what the camera settings had to be.”

Bean – “The first ones (we took in training) weren’t very good. But on the Moon, they were all good. So we really had learned in training how to do it by using real film, having it developed, having it debriefed. I think that’s why the photography got better with each mission, in general. Because the photographers would impart the (experience gained on a mission) to the next crew and help them be better. So they did get better. And I thought the photography did too.”

Even though they were trained, the “sight-and-shoot” method of course resulted in a lot of sub-optimal framing. This is apparent in the original, uncropped version of one of the most famous photos from the lunar landing (below). On other, more published versions of this photo, the horizon have been corrected and more black space added above Aldrin’s head (e.g. this version).

Buzz Aldrin on the Moon. Photo by Neil Armstrong/NASA. Click for larger version.

It’s been speculated if it was a deliberate decision by NASA to let Armstrong take most of the photos, and so give Aldrin, forever the second man on the moon, a bigger place in the limelight. Whatever is true, Aldrin himself states that Armstrong simply was a much better photographer than himself.

A total of 1407 exposures was made during the Apollo 11 mission, on 9 magazines of film. 857 black & white photos and 550 color photos. Only the film magazines were brought back from the moon. 12 Hasselblad cameras were left behind on the lunar surface during the Apollo program.

All photographs related to the Apollo program, from both training and missions, are available with annotations at the Apollo Image Gallery. For more space photos, check out the Great Images in NASA (GRIN) image library.

§ 74 Responses to The Apollo 11 Hasselblad Cameras

You are currently reading The Apollo 11 Hasselblad Cameras at The Sterile Eye.