In October 2008 I visited the Hunterian Museum in Glasgow, where William Hunter’s great book of obstetrics was on display. Published in 1774, The Anatomy of the Human Gravid Uterus did much to  advance the understanding of human pregnancy. The book contains 34 copper engravings. 31 of these magnificent medical illustrations were made by a mysterious man called Jan van Rymsdyk.

I was interested in finding out more about this Dutch artist working in England in the 18th century, but soon realized that very little is known about him. Some historians can guess which artists he trained under based on his style and they think he was born somewhere in Holland between 1700 and 1730. He lived and worked in England between 1745 and 1780, but no one knows what he did before and after that period.

What is left after him is his medical illustration work for some of the most notable obstetricians of the time, including William Hunter and William Smellie, a book with drawings of curious items in the British Museum he published himself, and a handful of portraits.

For the British Museum book, simply titled Museum Britannicum, Rymsdyk (or Riemsdyk as it is also spelled) included several personal footnotes and commentaries that tell us something of what his life must have been like.

Jan van Rymsdyk’s first assignment as a medical illustrator seems to be for William Smellie’s Sett [sic] of Anatomical Tables, published in 1754. This was a visual companion to Treatise of the Theory and Practice of Midwifery and contained 26 (out of 39) plates drawn by Van Rymsdyk. The plates are much more detailed an life-like than other more schematic illustrations of the era, and it was probably because of this assignment that William Hunter commissioned Van Rymsdyk to illustrate his great book on obstetrics.

Demonstration of forceps delivery from William Smellie's "A Sett of Anatomical Tables". Engraving from a drawing by Jan van Rymsdyk.

For his book, Hunter was not interested in illustrations that showed an “ideal” uterus, but meticulous copies of real dissected specimens. In Hunter’s own words an illustration like this “represents what was actually seen, it carries the mark truth, and becomes almost as infallible as the object itself”. And this is exactly what Van Rymsdyk produced. William’s brother and famous surgeon John Hunter worked together with Van Rymsdyk in the dissecting room. John preparing the display from the corpse of women who had died in various stages of pregnancy,  and Jan making life-size drawings in red chalk. These sketches were later made into engravings for the printing of the book. 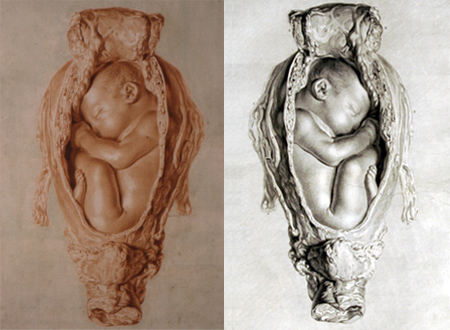 Comparing the drawings for Smellie’s and Hunter’s books you can see that Van Rymsdyk have improved his skills. The sketches are almost photorealistic reproductions down to the tiniest wrinkle and hair. Other painters of the time criticized Van Rymsdyk for being too accurate and detailed. They saw his anatomical illustrations as a lower form of painting, as it was “just” copying and not the result of an artistic mind. In Museum Britannicum Van Rymsdyk defends his style of work. Here is a passage where he describes why he thinks it’s important to cover every tiny little detail. It could almost pass as a description of macro photography:

there are three different ways of imitating an Object; the first is to dispose Nature at a tolerable Distance, suppose that of Fifteen Feet, where all the minutiae is lost, and only the Form, and grand Masses are to be seen; this Distance is in general approved of large Works, which are to be seen on high, as the Pictures on the Veiling at White-Hall, British Museum etc. The second or medium Distance, is where the small parts are more visible, as at Five Feet, or thereabouts; Painters never, or seldom exceed this, but the third is, where the Different Substances, and every minute Part is discovered by being brought so near the Eye. This Distance I was obliged to make use of, for to represent Nature in its greatest Beauty; the other two distances are what I would call only representing the Effect of Nature, as she appears at the Distance; or the Distance for an Artist to get a good deal of Money, and use much Art, but shew [show] little of Nature. 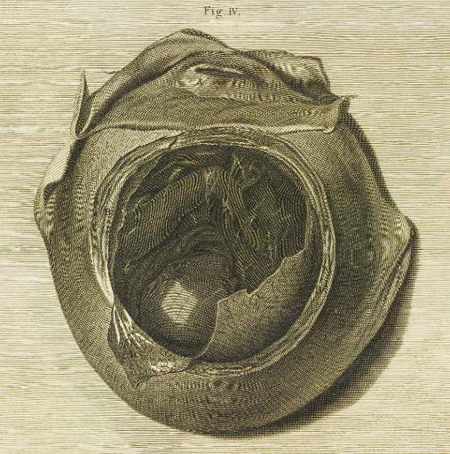 Reflection of a dissection room window in the chorion (outermost membrane) covering a fetus from William Hunter’s "Anatomy of the Human Gravid Uterus".

Ironically, it seems that Van Rymsdyk ended up feeling bitter about the only works he are known for today. In the conclusion to his Museum Britannicum book he writes that he has taken “a dislike to those Anatomical Studies etc. in which I was employed.” He also felt he had been ill-treated by William Hunter, who he accused of having discouraged him from becoming a “real” painter. Although he insistingly defended his style of art, it almost seems like he secretly did feel inferior to the “proper” artists.

William Hunter didn’t mention Van Rymsdyk in the Anatomy of the Human Gravid Uterus. The preface just refers to “the ingenious artists who made the drawings and engravings”. Maybe Hunter saw the dissection as the real art? Or the engravings that made it possible to print a book? Maybe it’s not so hard to understand he felt he had “Sacrificed his Talents”, as he put it.

Whatever he felt, Jan van Rymsdyk will always stand as one of the greatest medical illustrators of all time. And although he drew and painted, in a way it feels like he was the first medical photographer, documenting the specific rather than the general. He certainly didn’t sacrifice his talents, but put them to use for a greater good – the advancement of medicine.

You are currently reading Jan van Rymsdyk – Drawer of Wombs at The Sterile Eye.