Run in the Hills 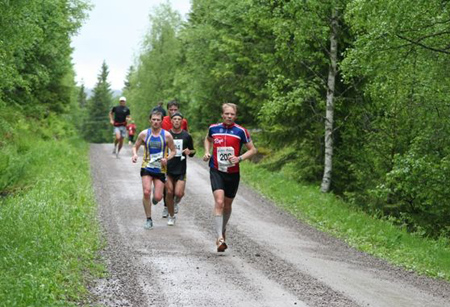 Dirt roads in the Nordmarka forest outside Oslo. Photo by Olav Engen.

On Saturday I ran my first marathon. I’ve run a couple of half marathons before, but now was the time to go full length.

A note to my readers: This post is clearly off-topic for this blog, but hey, who wouldn’t write about an experience like this?

The elevation profile is quite tough, with a total climb of over 1400 meters. I live close to another Oslo forest, Østmarka, and I’m used to running hilly courses, so I thought this would suite me well. It would of course also be an extra challenge – the mileage plus the climb.

I had the opportunity to run with friends who knew the course, which made it easier to adjust the pace and anticipate the hardest climbs.

So how did it go? I set out with a pace of 6:20 per km (4:27:15 total). This felt good. I saved energy by walking fast up some of the steepest slopes and running faster downhill. The first part of the race has most of the climbing, so I passed the halfway mark after 2 hours and 16 minutes (average pace 6:27). This held to about 28 km. Then my leg muscles started to cramp up.

I had never ran longer than 24 km before, so I was prepared to run into some kind of problem beyond that, but the muscle spasms became quite a challenge. From 30 km I had spasms in most of the different leg muscles at some time. Having run a lot I know that the best strategy when pain sets in is to keep on running, and I did. The spasms came and went and I had to alternate between walking fast and running. It became harder and harder to motivate myself to start running again after walking, but I kept on alternating. 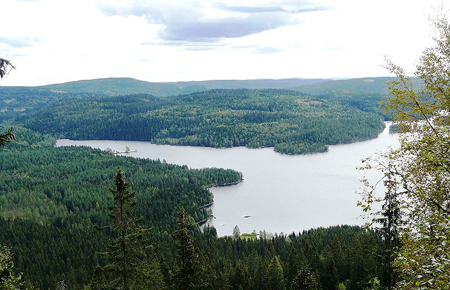 View from Kikut, about halfway through the course. Photo by Chell Hill.

The only goal I’d set for myself before the marathon was to finish, but I had a secret hope of doing so in under 5 hours. At 38 km I saw that this was still possible, if I pressed on and cut down on the walking. This was hard, as my legs now felt and behaved like two tree trunks.

200 meters from the finish line the big toe on my right foot cramped up, curling up painfully under the foot. The pain made me crouch down, but I somehow managed to stand up and put pressure on the foot. The spasm stopped and I could finish the race running, at 4 hours, 57 minutes and 2 seconds (average pace 7:03).

During the race I drank 16 cups of sports drink and ate 3 half bananas, 2 half packets of raisins, half a slice of white bread with jam, 1/4 of an energy bar and 2 packets of energy gel.

It was interesting to find that it was not my endurance that set the pace, but the amount of pounding my legs could take. The mental fight to keep on going and finish in under 5 hours despite my legs cramping up on me was the greatest and most satisfying challenge of the experience.

So I’m going to run again next year, but I’ll have to take those legs out for longer runs if they’re not gonna cramp up on me again.

§ 2 Responses to Run in the Hills

You are currently reading Run in the Hills at The Sterile Eye.