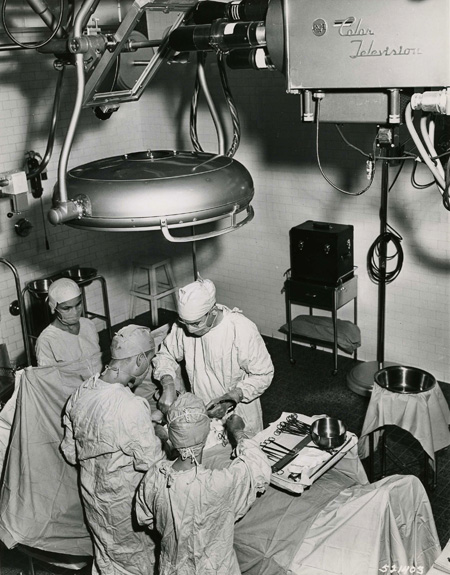 The last week I have been in contact with the kind people of the Otis Historical Archives at the National Museum of Health & Medicine regarding a post I’m writing. In the process they dug up this very interesting photo from an OR in 1957. END_OF_DOCUMENT_TOKEN_TO_BE_REPLACED 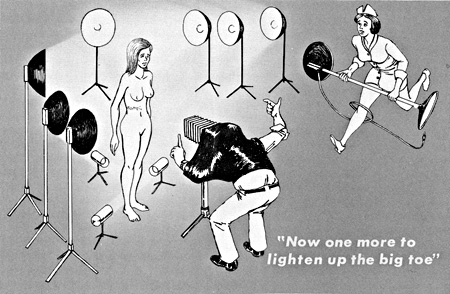 "Figure 125 - The best single suggestion for good lighting is: DON'T do it as cartooned." Click to see larger version.

Good lighting requires simplicity. The least number of lamps possible should be employed. The greatest intensity should be directed at or near the center of the area of interest. The major lighting recommendation is summarized in Figure 125.

The OR Before CCTV 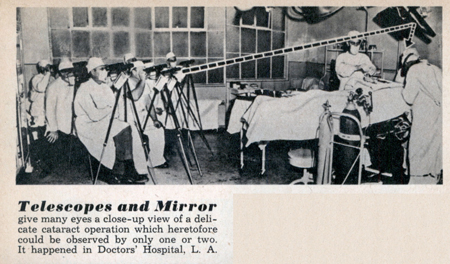 From the March 1948 issue of Mechanix Illustrated:

Telescopes and mirror give many eyes a close-up view of a delicate cataract operation which heretofore could be observed by only one or two. It happened in Doctors’ Hospital, L. A.

I can’t help but think that they wrestled for the best places, and that those in front (who obviously won) must be orthopedists. Who else would have the muscle to subdue a whole gang of ophthalmologists? But then again, why are they interested in a cataract operation?

While browsing the Wellcome Images collection I came across these photos showing the various activities of a mid 1980’s Medical Illustration departement. Most likely at the Charing Cross Hospital, the researchers at Wellcome tell me.

It’s interesting to see that even though the technology has changed a lot, the tasks are still much the same: clinical and specimen photography, video production, graphic design and presentation support.

WordPress sent me a great review of The Sterile Eye stats for 2010. Here’s a summary:

The Louvre Museum has 8.5 million visitors per year. This blog was viewed about 85,000 times in 2010. If it were an exhibit at The Louvre Museum, it would take 4 days for that many people to see it.

The busiest day of the year was April 17th with 1,105 views. The most popular post that day was Jan van Rymsdyk – Drawer of Wombs.

These are the posts and pages that got the most views in 2010.

You are currently viewing the archives for January, 2011 at The Sterile Eye.