Photographer Shoots His Own Surgery 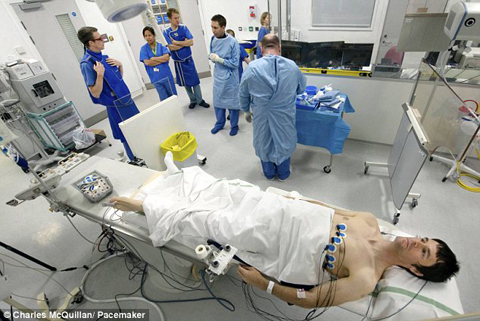 Photographer Charles McQuillan has won the 2011 BT Northern Ireland Press Photographer of the Year for his photographs of his own heart surgery. Suddenly diagnosed with coronary artery disease at the age of 39, McQuillan decided to shoot his subsequent operation to busy his mind and cope with the situation.

In an interview with the Irish Times, McQuillan outlines the technical aspect of the shoot:

In order to photograph himself undergoing the surgical procedure, Charles McQuillan used four cameras – one that he carried with him, two that were fixed on tripods at either end of the operating table, and one secured above the bed using a “magic arm”.

As the team worked on his heart, McQuillan was able to switch between the three cameras using a special remote control or transceiver, holding the device in whichever hand he had free at the time.

I did a recce beforehand, so I knew exactly where to position the cameras. I manually pre-focused them on where I knew the doctors or I would be.”

On the surgeon’s reaction to his project, McQuillan says:

“I think they felt as comfortable being photographed by me as I was being operated on by them. There was a sense of mutual respect.”

See more of his photos from the operation here.

Read the interview with McQuillan in the Irish Times.

You are currently reading Photographer Shoots His Own Surgery at The Sterile Eye.