In July work tends to be less busy than the rest of the year, and there’s time to finish larger projects, test new equipment and tidy up the storage room. While doing just that, I came across a large batch of expired instant film in one of our fridges. I had seen them before, but now I had time to see if they still worked.

All the films where 4.25×3.25″ packfilm for 100 series Land cameras. We don’t have one of those, but we do have a Hasselblad Polaroid 100 Magazine and no less than four Hasselblad cameras. With this type of instant film a film “sandwich” containing the negative, a chemical pack and the positive sheet is manually pulled out of the magazine after each exposure. When pulled out the “sandwich” passes between two rollers than squeeze the developer chemicals out of the packet and spreads it between the negative and the positive sheet. Then you have to wait a predetermined time (typically 120 seconds if the temperature is 20°C) before you peel off the positive sheet and discard the rest.

I loaded the films into the Hasselblad Polaroid magazine and put it on the back of our Hasselblad 503CX. All the photos were shot with the Carl Zeiss Planar 80mm 1:2,8 standard lens. The camera becomes quite bulky with this magazine, but it was never intended to convert the Hasselblad into an instant camera. The main use for this magazine, and what my department used it for, was to preview a shot, lighting, exposure etc. It was cheaper and easier to snap a Polaroid first than to waste film. The magazine has the Hasselblad 2.25×2.25″ format, but the instant films are 4.25×3.25″, and that’s why the instant photos have a large dark frame around them. Only part of the negative is exposed. I have chosen to scan the whole sheet however, so you can see the effects of aging and light leaks. 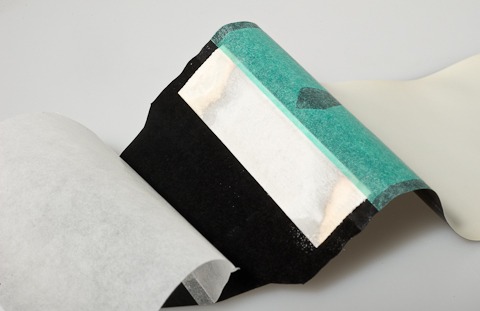 Did the expired films still work? Yes and no. I first shot the FP-100B film which only had four exposures left. No problems at all, actually. This film did not have any problems with light leaks and the contrast was still very good. The photos where not that exiting though, as I was a bit too excited to see if it worked and just shot something to see a fast result.

The oldest film did not do good. We had over 30 cartridges of Polapan 667 film expired in 1994. I opened and tested 6 of them randomly. In all of them the chemicals packet had dried up and the film sandwich came apart as I pulled one out of the magazine. 17 years is a long time for instant film. All the cartridges ended up in the garbage.

The last film, the Polacolor 679 was only 8 years old and that one worked, but still had some problems. Contrast was a bit low, all the photos had different color casts and most of them light leaks along the edges. I really like these unpredictable effects, though. You can have all the control in the world over the shot, but there’s still a little twinkle of magic to the result. Probably the same reason people like to use Hipstamatic instead of the standard camera on their iPhones. You never know exactly what the result is going to look like.

What I also really liked about this little project was to be limited by the number of photos I could take again. With digital photo we don’t have that anymore. Of all the instant film in that fridge only 14 photos still worked and used 4 of them just checking. With the last 10 I really had to consider what I wanted to shoot and how I wanted to shoot it. Hope you enjoy the photos!

In another fridge I didn’t know about I found some 4×5 inch large format Polaroid film which expired in 2007, so this fall it’s time for a new project!

§ One Response to Expired Instants

You are currently reading Expired Instants at The Sterile Eye.