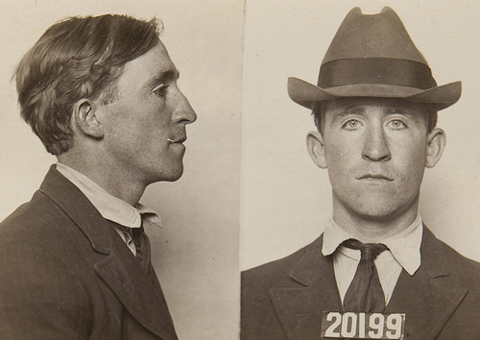 Photo from the Museum of Photographic Arts Collections. Public domain.

The ear-nose-throat docs at my hospital use our services a lot. One of the most frequent types of patients we get are “noses”. Patients who are going to have their noses operated on for a variety of different reasons. The photos taken of these patients is a standardized set of six photos, including frontal view and profiles. The only other instance when people are shot like this is if they’re in police custody. Mugshots.

I actually shot a set like this of a guy once who suddenly said “normally I’m the one taking these photos”. He turned out to be a policeman. In my experience most patients do not think about this similarity and that’s why the joke works. After two or three shots I normally say “Well, the only thing missing now is your prisoner number.” Nine out of ten will laugh, say “yeah, that’s true” and relax a little more, and the last one will smile politely, leaving me a bit awkward. There’s a couple of times however, we’re the joke have been much less successful, all because of my too frequent use of it.

One time was a really busy day with an especially large number of nose patients. I brought patient number twelve into the studio, a young man with a broken nose, and started shooting. When I’m doing the profiles the mugshot joke automatically pops out. No reaction but I don’t notice. I tell him to face me again for a final shot and he looks slightly angry. That’s when I realize I’ve just pulled the joke to an actual prisoner. A cuffed one at that. His prison guard who’s been in the room with us didn’t laugh either.

The other time it sort of was the other way around. This was no prisoner, but also a young man with a (severely) broken nose. He was in a somber mood, so I decided it ws time for the joke. But the prisoner number didn’t cheer him up, he only went from somber to slightly angry, just like the prisoner. I didn’t understand why , but later that day it dawned on me that he must have thought I was joking about him looking like an inmate with the broken nose and not the mugshot setting.

Because most patients don’t think mugshots when they’re sitting there, you see. But I do, and nowadays I often think before I pull jokes too.

You are currently reading Mugshots at The Sterile Eye.