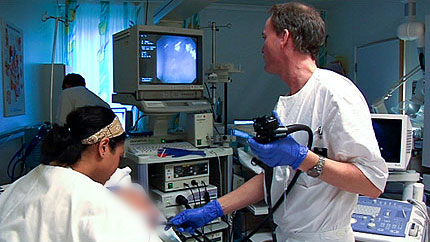 Today, three videos I’ve made of diagnosis and treatment of esophageal cancer were published on www.oncolex.no.

The voice overs are in Norwegian, but reading this post before watching the videos should make them understandable to non-Norwegians as well.

Endoscopic ultrasound (EUS)
This is a diagnostic procedure used, amongst other things, to screen for esophageal cancer. A special gastroscope, containing both a camera and an ultrasound probe is inserted into the esophagus. The gastroenterologist uses the camera to place the ultrasound probe in the desired location and then visualizes the surrounding tissues using ultrasound.

The purpose of the specific procedure in my video is to biopsy some abnormal lymph nodes using fine needle aspiration. With the probe in the right place and the lymph nodes visual on the screen, the doctor inserts a special biopsy needle into a canal in the gastroscope. The needle is then brought into the nodes and moved back and forth to gather cells. The aspirate is stained and viewed in a microscope immediately after the procedure.

Transhiatal esophagectomy (THE)
This is a video of a surgical resection of the distal part of the esophagus and the cardia, using the transhiatial approach. The top of the stomach is mobilized and the esophagus is dissected from the abdomen through the hiatus and mediastinum without opening the thorax. When this is done, the abdominal aorta and pleurae is visible in the video. 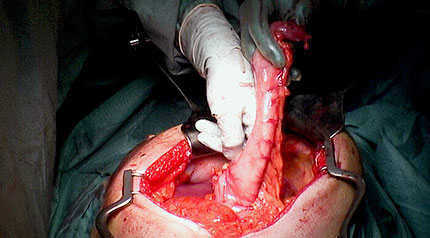 The surgeon then moves to the neck. Making an incision on the left side he dissects down to the esophagus. It is dissected and cut. A ribbon is tied to the part that isresected. When the distal esophagus is pulled down into the abdomen, this ribbon is used to pull the tube shaped stomach up into the neck. The stomach and esophagus is joined by anastomosis, and a a stomach probe is placed in the stomach.

Esophageal stenting
For patients with inoperable esophageal cancer, stenting is an important treatment to make it possible for them to eat. If the esophagus is blocked (due to stenosis) a self-expanding stent can be placed in the esopaghus to ensure an open passage from the mouth to the stomach. 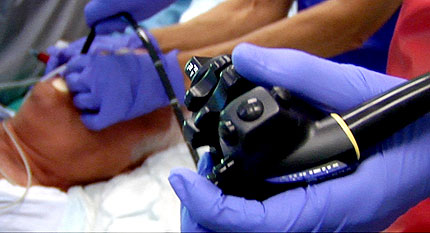 A gastrocope is used to guide the placing of the stent.

The stent is placed using a gastroscope. The esophagus and stomach is first examined visually. The upper and lower parts of the tumor are marked with small led balls using live x-ray. A guidewire is the placed in the esophagus and the stent is placed over this and put in the right location using live x-ray. Finally the placing is examined visually using the gastroscope.

You are currently reading Esophageal cancer videos at The Sterile Eye.