The pump used to inflate the dilatation balloon.

Another endoscopic video of mine published recently. This video shows balloon dilatation of the esophagus following an esophagectomy.

The patient has gone through an esophagectomy to remove a tumor. After removing a part of the esophagus the GI tract is reconnected by modifying the stomach and reconnecting it to the esophagus (read more about that and watch a video here). The scar tissue forming around this anastomosis has caused a narrowing of the passage. The dilatation is done to expand this narrowing.

The esophagus is first examined using a gastroscope. A wire with a balloon on the tip is inserted through a canal in the scope. The balloon is placed in the middle of the narrowing and is then inflated with liquid to a certain pressure. It is left like this for a few minutes, before being deflated and removed. 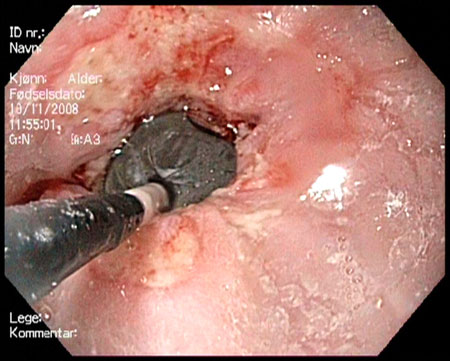 The balloon is passed through the narrowing after dilatation.

You are currently reading Esophageal dilatation video at The Sterile Eye.