Back of photo request card used by the Photographic & Video Services at Oslo University Hospital.

In my world the photo request card reigns supreme. This simple, green on white, 15×10 cm card is the source of oh so much confusion.

Doctors request photos of their patients. After or during the consultation they fill out a photo request card provided by our department. This includes the patient’s name, social security number and diagnosis, the name of the doc and how she wants the photos delivered (CD, email, database, paper copies).

The confusion starts here. Most of the times the patient name and number is added as a printed sticker – and we can’t be wrong – except we can.

People come in all shapes and especially at the country’s most specialized medical center. One of the first things B (who’s been at the dept since before I was born) told me was to always check the patient’s birth date before anything else. He especially remembered one time when he’d photographed a little girl and during the shoot asked if she’d started school yet. “Yes,” she mumbled, her cheeks red. “I’m in the fifth grade”.  A blunder he never repeated.

I usually check their address too, just to have something to talk about. One time last week I didn’t have time before shooting a one-year-old. During the whole shoot something seemed out-of-place. I couldn’t put my finger on it before I saw the address afterwards. It was the interaction between the girl and her mother. It hadn’t seemed relaxed and natural. The address read “C/O child welfare services”. It simply wasn’t here mother. I’m glad she was so young. It’s easy to assume things and put one’s foot in while trying to chat.

We have the same problems with doctor’s writing and signatures as everybody else in health care. Thank god for stamps with doc name and dept. and the one who realizes his shortcomings and always provides his name in block letters after the signature.

On the back of the card is a set of standard anatomical views of the human body. These are intended to make it easy for the docs to tell us exactly what part(s) of the body they want us to shoot (see top of the post). Usually very useful, but also another source of confusion.

Sometimes we confuse ourselves. The ENT dept. sends up another nose and we don’t even look at the card, just to find out later that the doc had some special request for this particular patient, who by then of course is long gone.

Most of the time though, we do look at the markings. They can also be quite confusing.

What exactly is the doctor asking for here?

Every now and then you get a patient where the doc’s markings don’t correspond to his diagnosis. Like the back of the head of a rhinoplasty patient. Or everything but the head on a patient with psoriasis of the scalp. We know docs are stressed out most of the time, so our golden rule is to always shoot what’s marked and also what’s forgotten. The key here is the patient herself who will know the distribution of her symptoms. 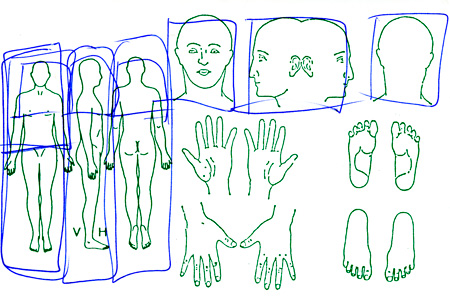 This doc don't need photos of feet or hands.

We get confused but we always try to sort it out. Shoot more than required; page the doc and ask if he really wants both email, CD and paper copies; call the patient and ask her to come by the next time she’s in to take that shot we missed. People are mostly nice and want to help, at least as long as we do too.

§ One Response to The Card

You are currently reading The Card at The Sterile Eye.